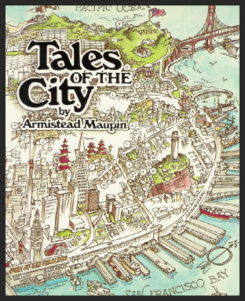 In 1982, I moved to San Francisco to do a year long internship.  When I arrived there, I felt like Mary Ann Singleton:  after five days I had fallen in love with the City.  Well, that’s not really true; I required only an hour.  Every free moment I had, I explored the City's nooks and crannies.  In late 1982, when my internship ended and I moved from San Francisco.  From that moment on, I looked for any opportunity I could to return to the City – even if only for a few days visit.

While I was doing my internship in San Francisco, “Tales of the City” still appeared as a serial in The San Francisco Chronicle.  Several folks where I worked were avid fans of Tales and tried to get me hooked on the stories.  You need to remember that by 1982, the Tales had been going on for six years.  The characters and their stories had long been established.  I read two, maybe three, installments of Tales.  I felt like I was jumping into the middle of a TV soap opera.  I was lost.  I couldn't keep the characters or the story lines straight.  I soon lost interest in the serial.

I connected with Armistead Maupin's stories for two reasons:

First, I was familiar with the City.  I had been to many of the locales mentioned in the books.  I could visualize the characters in Tales shopping at Cost Plus at Fisherman’s Wharf, drinking an Irish Coffee at the Buena Vista, or hopping on the #41 Union MUNI bus for a trip up Russian Hill.

Second, at the time I started reading Tales of the City, I was beginning the long process of coming out of the closet.  Through his stories, Armistead Maupin introduced me to a wonderfully diverse group of people.  They included gay people who were becoming themselves.  They understood that they were not "sick"; they were normal.  Very powerful.

In the early ‘90s, I lived behind the Zion Curtain (Utah).  I had a desire to re-read the Tales stories.  I had just started rereading Tales of the City.  Mary Ann was checking out Mrs. Madrigal’s apartment.  Suddenly a question popped up in my head:  If all of the other locations mentioned in Tales were real – Zim's, the Buena Vista, Perry’s, and Cost Plus – could Barbary Lane be real??  I pulled out my tattered AAA Map of San Francisco and re-read Maupin’s description of the location of Barbary Lane.  And I found a lane right where Maupin said one would be.  It wasn’t Barbary Lane; it was called Havens.  I then grabbed a pen and each time a restaurant, a bar, a store – any place – was mentioned in the stories, I listed it in the margins of my books with as much information as I could regarding its location, what event(s) occurred there, and so on.

Years later, I moved back to San Francisco and walked its streets finding many of the Tales locations.  When friends of mine who were also Maupin fans came to visit, I took them to Macondray Lane to see the Barbary Lane steps.  We warmed up on an Irish Coffee at the Buena Vista.  We sat  bench on Napier Lane as DeDe did in 1976.  This casual, informal tour of Tales locations eventually evolved into this website that would enable fellow Barbaryphiles to explore the San Francisco (and beyond) of the friends we made in the Tales

Three years later, I was living in Atlanta.  A friend of mine asked me if I remembered the “Tales of the City” serial in The Chronicle.  I told her I did, but I had found it too hard to jump into the middle of an on-going story.  She informed me that the first several months of the serial had been collected, edited, and published in novel form.  She lent me Tales of the City which I immediately started to read.  From that moment on, I was a “Barbaryphile”.

Why Tours of the Tales?