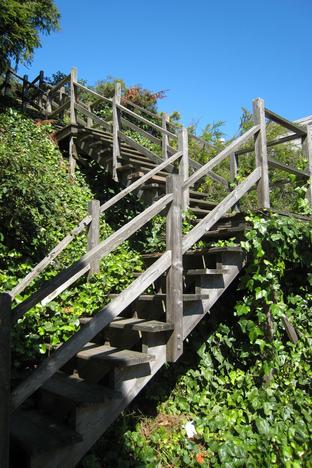 Tour #3:  Jackson Square is where you'll Halcyon Communications where Edgar, Beachamp, Mary Ann, and Mona all worked...well, until Mona was fired, Edgar died, then Beachamp died, and Mary Ann left to move up to better and bigger things.  Oh, and Armistead Maupin worked in two ad agencies here in Jackson Square as well,

Tour #4:  Telegraph Hill and Back to Fisherman's Wharf takes you up and down Telegraph Hill.  This is one of the prettiest walking tours of the Tours of the Tales.  You visit three of the homes where Armistead Maupin lived.

Tour #5: Alcatraz is a very interesting tour of The Rock.

Tour #6: Chinatown, Nob Hill, and the Edge of the Tenderloin takes you up Nob Hill by cable car.  There are several connections between Tales of the City (both the book and the miniseries) and Alfred Hitchcock's "Vertigo".  One of those connections is encountered in this tour.  Armistead Maupin had dinner one Sunday evening in May 1976 that ended with the first installment of "Tales of the City" being read to him the next morning by a well known movie star.

Tour #7: Union Square wraps up the northwest corner of San Francisco by taking you around Union Square where you can kill time before catching a Greyhound bus to Winnemucca or go shopping for just the right safari outfit before heading into the wilds of Golden Gate Park.

Tours 1 - 7 take you up and down hills in the northeast corner of San Francisco where most of the events in the first five books of the Tales unfolded.  These tours will also take you to several locations where scenes from the three miniseries were filmed.

Tour #1: In the Beginning... Aquatic Park and Russian Hill  starts where the Tales start:  At the Buena Vista - where you can start your tour with an Irish Coffee just as Mary Ann started her new life in San Francisco.  The tour takes you up Russian Hill - "ground zero" for much of the early Tales stories.  You'll visit the iconic Macondray Steps at Taylor, the entrance to Barbary Lane.

Tour #2: North Beach takes you across North Beach where Anna and our friends at 28 Barbary Lane ate and shopped.  Tour #3 leads you into Jackson Square where Armistead Maupin worked two short term jobs prior to starting the Tales.  I