Text for Tour #1:  In the Beginning... (Aquatic Park and Russian Hill) 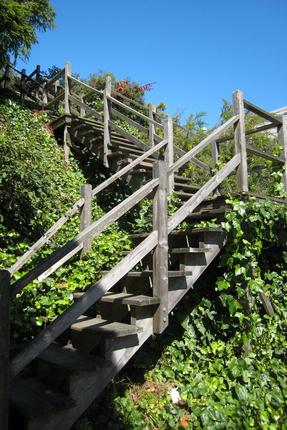 If you have time for only one tour, this is the one you should take.

This is the first of the self-guided walking tours that was developed and it is one of the most informative.

This is "Ground Zero" for many of the locations in the Tales lore as well as several scenes from the Tales of the City miniseries.  You'll visit Macondray Lane (and the iconic Macondray steps at Taylor) and Haven's Lane.  You'll see why these two lanes became the inspiration for Barbary Lane.  You'll see where Armistead Maupin lived when he started writing Tales as a serial in The San Francisco Chronicle.  This former residence near the summit of Russian Hill was the inspiration for the  "pentshack" atop 28 Barbary Lane.

Tour #1:  In the Beginning... (Russian Hill and Aquatic Park)