Jon Fielding's office was only one block north of Union Square.  Prue Giroux purchased the perfect safari outfit from Eddie Bauer before returning to the wilds of Golden Gate Park to search for her peripatetic dog.  Queen Elizabeth and Prince Philip stayed at the St. Francis Hotel on the west side of Union Square.  The "Tales of the City - Musical" played at the American Conservatory Theater (ACT)  one block west of the Square at the corner of Geary and Mason Streets.

This walking tour is short.  Combining this walking tour with window shopping (or serious shopping) and a meal at one of the many restaurant around and near Union Square can make a relaxed and delightful day. 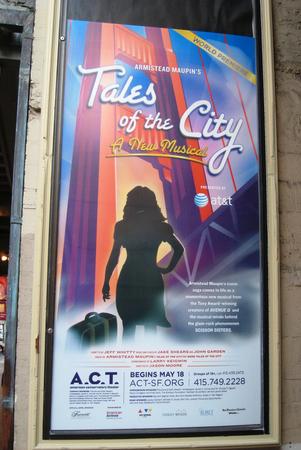