You will walk through the San Francisco Flower Mart where you can purchase some roses (without having to come in the wee hours of the morning).Most of the rest of the tour takes you to a number of former and current lesbian and gay bars mentioned in the Tales stories including the End Up where simultaneously Michael won the Mr End Up dance contest and lost Jon.

Near the end of the tour, you find the business that became the model for Ben McKenna's furniture making shop.

The tour ends at the building that once housed the Hostess Bakery where D'orothea's father once made Twinkies .

Here is the link to download, save (and print) the PDF file for Tour #9: SOMA (South of Market).

Here is the link to access the Google Map for Tour #9: SOMA (South of Market).

Here is a link to the photos found in Tour #9: SOMA (South of Market).

Tour #9 winds through SOMA (South of Market).  This neighborhood was one of the first gay neighborhoods in San Francisco.  It was the center of gay and lesbian culture before it spread to Polk Street and The Castro.  During the times of the early Tales stories, many gay and lesbian bars - along with several baths - were still open and were visited by many of the Tales characters.

In this tour, you will see frequently see the phrase “This is the former location of…” and for a good reason: many of the restaurants, bars, and dance clubs mentioned in the Tales books have closed and/or relocated over the years.

The tour starts along the Bay front where San Francisco bid farewell to Queen Elizabeth II and Mary Ann met an officer from the Queen's departing yacht. 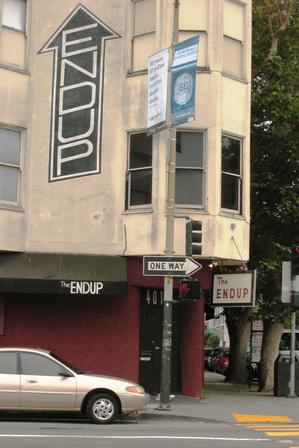