In the “Tales of the City” miniseries, after exiting the Buena Vista, Laura Linney crosses Beach toward the cable car turntable.  The scene then cuts to her walking down the cement bleachers that face the Park’s lagoon.  The section of the bleachers seen in the movie is on the right as you face them from the lagoon.  You can see the Ghirardelli sign looming large behind Laura as she descends the bleachers.

Behind the bleachers is the San Francisco Maritime Museum. 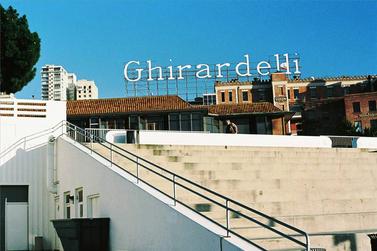 Aquatic Park, bayside, north of Beach Street stretching between Hyde and Van Ness streets (at the western end of the Fisherman’s Wharf area)

The park was featured twice in the Tales of the City.

Curious about how Maupin came up with the story of Michael and the monkey?  He drew upon his own experience.  When serving as a member of the US Navy’s River Patrol Force in Viet Nam in 1969, he had a pet monkey named Assbreath.  There is a photo of Armistead and Assbreath on page 28 of Armistead Maupin by Patrick Gale.

Not long after he moved to San Francisco, Armistead Maupin’s former girlfriend came to San Francisco to visit him.  They walked out to the end the pier – where you’re standing now. 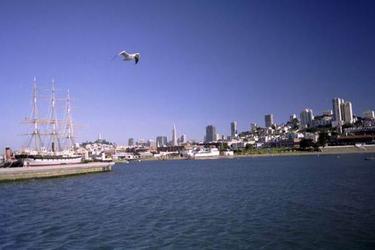 It was built in 1939 as a bathhouse for the Aquatic Park.  The Museum’s Art Deco design was intended to resemble the clean lines of an ocean liner.  The Maritime Museum along with Aquatic Park, the Municipal Pier (coming up next) and the Hyde Street Pier (with the various ships) make up the San Francisco Maritime National Historical Park.  Remember the location of the Maritime Museum.  It will be mentioned again shortly.

The first time was immediately after Mary Ann finished her call to her mother, she "left the bar and walked through Aquatic Park to the bay.  She stood there for several minutes in a chill wind, staring at the beacon [i.e., the lighthouse] on Alcatraz.  She made a vow not to think about her mother for a while.”  (Tales of the City/28 Barbary Lane, page 11)

Armistead started to hem and haw – struggling to tell her how happy he was.  The woman’s thoughts eagerly raced forward expecting him to propose to her.  She wasn’t fully prepared when he finally said that he was so happy because he was dating a lawyer.  A male lawyer.

She wasted no time calling Armistead’s mother the next day.