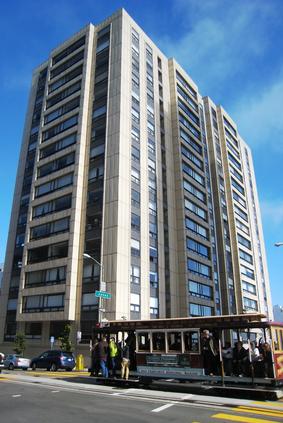 This is the former location of Mama’s at Gramercy Towers.

After learning that the twins were safely back in San Francisco after their abduction in Alaska by Luke (Further Tales of the City), DeDe and Mary Ann picked up the twins at Prue’s home on Nob Hill.  DeDe, Mary Ann, and the children then ate breakfast at Mama’s.

This location has seen many restaurants come and go.  In the early 1980s, Mama’s was housed in this space.  Rent went up and Mama’s went good-bye.  In 1986, Vanessi’s moved here from its location on Broadway.  Vanessi’s closed its doors 11 years later in 1997.  This was followed by a string of short-lived restaurants (Le Bistro, Sherlock's Pub, Gramercy Park, Watergate, Sparrow, Californian Bar & Restaurant, and Excelsior).

As mentioned above in this tour (The Fairmont), on the night of Sunday, May 23, 1976, Armistead Maupin dined with a few men at Mama’s – one of whom was Rock Hudson.  After dinner, Rock invited the group up to his suite at the Fairmont for a night cap.

Next Destination:  Intersection of Jones and Sutter Streets
View on Mobile