This was the original building for The Holiday Inn – Fisherman’s Wharf which eventually covered two city blocks just south of Fisherman’s Wharf.   This is where Mary Ann stayed during the first five days of her vacation in San Francisco.

In early March 1983, Simon Bardill, a handsome crew member of the Royal Yacht Britannia, jumped ship during Queen Elizabeth’s and Prince Phillip’s visit to San Francisco.  Like Mary Ann seven years earlier, he spent his first few nights in San Francisco here at the Holiday Inn until he too eventually moved up Russian Hill to 28 Barbary Lane.

Holiday Inn still operates the second of the two buildings in the next block to the east of the building pictured here. 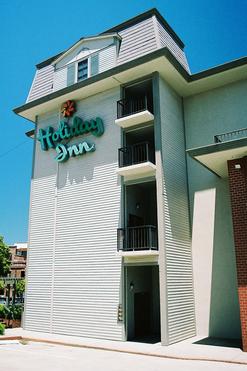