This was the location of one of the many Zim’s restaurants scattered across San Francisco and other parts of the Bay Area.  It was the Zim's located here that Brian visited in Tales of the City.

At 5:00 am one morning, Brian suddenly woke up with a growling stomach.  He hankered for a Zimburger.  He

When Candi finished her shift, she and Brian walked to her car which was parked next to the San Francisco Maritime Museum.

In the “Tales of the City” miniseries, Brian returns to the restaurant and invites Candi’s daughter, Cheryl, to accompany him to Mrs. Madrigal’s Christmas Eve party.  In Tales of the City, the invitation and the ensuing exchange of insults was by telephone.

Zim’s is called Sams in the Tales of the City miniseries.

Zim’s was well known for its juicy hamburgers, nice greasy fries, and thick milkshakes made with real ice cream and milk.  It was also known for its late night service.  The chain of restaurants was founded in late 1940s by Art Zimmerman.  The story goes that while fighting the Nazi’s during World War II, Zimmerman longed for two things:  to get out of the war in one piece and to return to America to a juicy hamburger and luscious milkshake.  His first restaurant was located on the northwest corner of Lombard and Steiner in Cow Hallow.  Eventually, a chain of Zim’s coffee/hamburger joints spread across the city and to other parts of the Bay Area.  Due to raising rent prices and other factors, one-by-one, the stores began to close.  The last three closed in October 1997.  Arthur Zimmerman passed away in 2008. 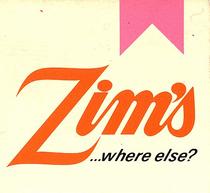 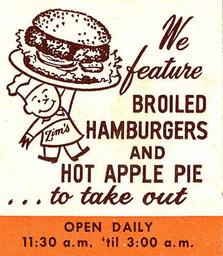 raided his dirty laundry basket until he found clothes that would pass the sniff test and down the hill he went to Zim’s.  His waitress’ name tag said ‘CANDI COLMA’.

“Anything else?  Dessert, maybe?”

“Whatcha got to offer?”

He flopped the menu shut and gave her his best Huck Finn grin.  “I bet it’s not…sugar.”

Moving closer to him, she tapped her pencil against her lower lip, cast her eyes left and right, and whispered, “I don’t get off till seven o’clock.”