Jackson Square Historic District, the neighborhood defined by Columbus Avenue on the west, Broadway on the north, Sansome Street on the east, and Washington Street on the south.

Jackson Square is not a square but rather a neighborhood.  It encompasses part of the former (and notorious) neighborhood formerly known as the Barbary Coast.  Sections of it escaped the fire following the 1906 earthquake making it the oldest commercial district in the City.

The interior and exterior shots for Halcyon Communication in the “Tales of the City” miniseries were taken in Los Angeles in the upper floor of a commercial building at 3287 Wilshire Blvd (at Berendo Street) – seen in this photo.  The view out the window of Edgar Halcyon’s office is of the Talmadge Apartments (3278 Wilshire) and Emmanuel Presbyterian Church (3300 Wilshire).

An interesting note:  In the “Tales of the City” miniseries, one scene shows Mary Ann hanging out the American flag (she also does this on a daily basis in Tales of the City).  Among the various background sounds of the city heard is a cable car’s clanging bell.  The closest cable car line to the Jackson Square district is at least three blocks away on California Street. 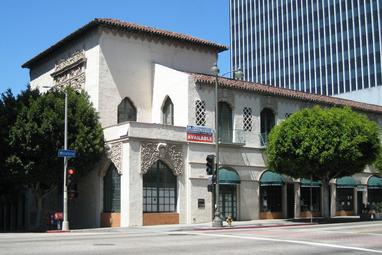 Armistead Maupin is familiar with Jackson Square.  After leaving the Associated Press (and afterwards a few other odd, poorly paying jobs), Maupin landed a job working at two ad agencies in this neighborhood (coming up next).  Maupin doesn’t provide an exact location in Jackson Square for Halcyon Communications in Tales of the City.  The only description of the Halcyon Communications building is that it had been a food processing warehouse in an earlier incarnation and that it had “mellow brick walls”.