This was the office and headquarters of Anson Hotaling’s business enterprises which spanned both sides of the alley you just passed through that bears his name.  His enterprises included real estate and a distillery.

Whiskey, along with the whim of the wind, is the reason why this block of buildings was not dynamited or burned during the fire caused by the 1906 earthquake.  The story goes that the US Army intended to dynamite this block of buildings along Jackson Street to create a firebreak to protect a nearby Federal building.   The manager of Hotaling distillery pointed out to the army that the dynamiting of the warehouse full of whiskey would create a firestorm itself so the building was spared.

Along the side of the building facing Hotaling Place there is this little couplet that is very much San Francisco’s answer to religious self-righteousness:

“If, as they say, God spanked the town for being over-frisky,
Why did he burn the churches down and spare Hotaling's Whiskey?” 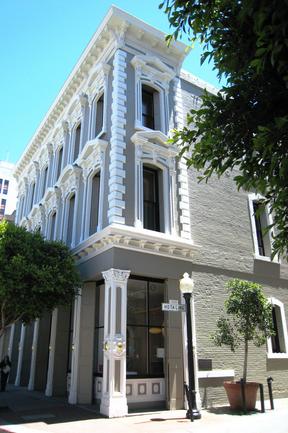