Suddenly, Michael grasped that the chant was about Grace Cathedral.  He immediately called Mary Ann to share this revelation.

Mary Ann and Burke decided to visit the Cathedral to further unravel the mystery of Burke’s forgotten past.  They walked west California Street from Mason Street.  As they walked along the front of the Pacific Union Club, Mary Ann ran her fingers along the Pacific Union’s bronze fence.

In More Tales of the City, Michael eventually recovered enough from his scare with Guillain-Barre syndrome to be released from St Sebastian’s hospital.  On the  evening of his return home to Barbary Lane, he and Jon sat together in bed going over back issues of Architectural Digest.  They discussed the Pacific Union Club which was built by the Flood family at the top of Nob Hill.  Suddenly, Michael unraveled some of the clues of the chant Burke remembered in his dream: 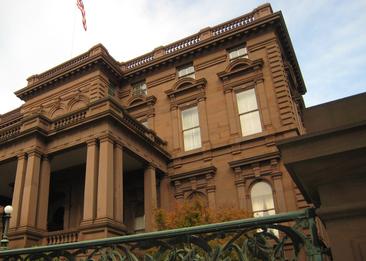 High upon the Sacred Rock
The Rose Incarnate shines,
Upon the Mountain of the Flood
At the Meeting of the Lines