In the “Tales of the City” miniseries, the scene with DeDe and Frannie Halcyon eating lunch was shot on a terrace on the east side of this building.

In the scene, DeDe tells her mother that Beauchamp is having an affair with Mary Ann.  As proof, she produces Mary Ann’s scarf – which Mary Ann accidently left in Beauchamp’s car upon her and Beauchamp’s return from Mendocino, California.

Armistead Maupin shared that when the scene was being shot, it was very windy and it even rained a little as Nina Foch (Frannie) and DeDe (Barbara Garrick) sipped Mai Tais.  At one point, Nina Foch lost a colored contact lens so the shooting of the scene was held up while someone fetched her another set of contacts.

The YWCA Apartments along with the Chinatown WYCA building around the corner on Clay were designed concurrently by the famous architect, Julia Morgan.  For a number of years, Julia Morgan was the official YWCA architect for the western United States.  The YWCA Apartments were originally the YWCA Residence Halls for the adjoining YWCA.  It was Morgan’s last major building for that organization.

Here is that scene from “Tales of the City”. 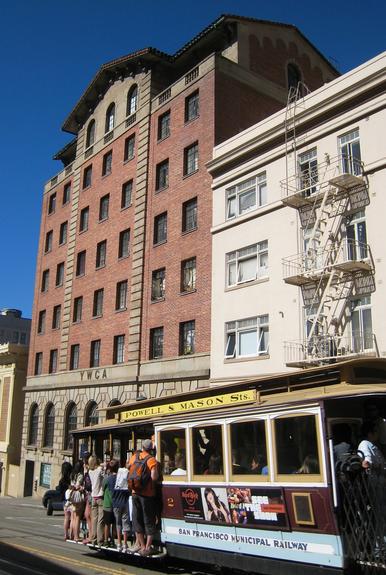